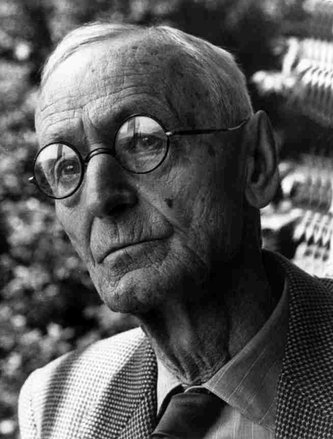 Hermann Hesse was a German-Swiss poet, novelist, and painter. In 1946, he received the Nobel Prize for Literature. His best known works include Steppenwolf, Siddhartha, and The Glass Bead Game (also known as Magister Ludi) which explore an individual's search for spirituality outside society.

In his time, Hesse was a popular and influential author in the German-speaking world; worldwide fame only came later. Hesse's first great novel, "Peter Camenzind", was received enthusiastically by young Germans desiring a different and more "natural" way of life at the time of great economic and technological progress in the country.

Throughout Germany, many schools are named after him. In 1964, the Calwer Hermann-Hesse-Preis was founded, which is awarded every two years, alternately to a German-language literary journal or to the translator of Hesse's work to a foreign language. There is also a Hermann Hesse prize associated with the city of Karlsruhe, Germany.

Siddhartha
Herman Hesse's classic novel has delighted, inspired, and influenced generations of readers, writers, and thinkers. In this story of a wealthy Indian Brahmin who casts off a life of privilege to seek spiritual fulfillment. Hesse synthesizes disparate philosophies--Eastern religions, Jungian archetypes, Western individualism--into a unique vision of life as expressed through one man's search for true meaning.
02

Steppenwolf
Steppenwolf is a poetical self-portrait of a man who felt himself to be half-human and half-wolf. This Faust-like and magical story is evidence of Hesse's searching philosophy and extraordinary sense of humanity as he tells of the humanization of a middle-aged misanthrope. Yet his novel can also be seen as a plea for rigorous self-examination and an indictment of the intellectual hypocrisy of the period. As Hesse himself remarked, "Of all my books Steppenwolf is the one that was more often and more violently misunderstood than any of the others".
03

Narcissus and Goldmund
Narcissus and Goldmund tells the story of two medieval men whose characters are diametrically opposite: Narcissus, an ascetic monk firm in his religious commitment, and Goldmund, a romantic youth hungry for knowledge and worldly experience. First published in 1930, Hesse's novel remains a moving and pointed exploration of the conflict between the life of the spirit and the life of the flesh. It is a theme that transcends all time.
05

Set in the 23rd century, 'The Glass Bead Game' is the story of Joseph Knecht, who has been raised in Castalia, the remote place his society has provided for the intellectual elite to grow and flourish. Since his childhood, Knecht has been consumed with mastering the Glass Bead Game, which requires a synthesis of aesthetics and scientific arts, such as mathematics, music, logic, and philosophy, which he achieves in adulthood, becoming a Magister Ludi (Master of the Game).
06

Beneath the Wheel
In Hermann Hesse's Beneath the Wheel or The Prodigy, Hans Giebenrath lives among the dull and respectable townsfolk of a sleepy Black Forest village. When he is discovered to be an exceptionally gifted student, the entire community presses him onto a path of serious scholarship. Hans dutifully follows the regimen of tireless study and endless examinations, his success rewarded only with more crushing assignments. When Hans befriends a rebellious young poet, he begins to imagine other possibilities outside the narrowly circumscribed world of the academy. Finally sent home after a nervous breakdown, Hans is revived by nature and romance, and vows never to return to the gray conformity of the academic system.
07

The Journey to the East
In simple, mesmerizing prose, Hermann Hesse's Journey to the East tells of a journey both geographic and spiritual. H.H., a German choirmaster, is invited on an expedition with the League, a secret society whose members include Paul Klee, Mozart, and Albertus Magnus. The participants traverse both space and time, encountering Noah's Ark in Zurich and Don Quixote at Bremgarten. The pilgrims' ultimate destination is the East, the "Home of the Light," where they expect to find spiritual renewal. Yet the harmony that ruled at the outset of the trip soon degenerates into an opening conflict. Each traveler finds the rest of the group intolerable and heads off in his own direction, with H.H. bitterly blaming the others for the failure of the journey. It is only long after the trip, while poring over records in the League archives, that H.H. discovers his own role in the dissolution of the group, and the ominous significance of the journey itself.
08

Peter Camenzind
Peter Camenzind, a young man from a Swiss mountain village, leaves his home and eagerly takes to the road in search of new experience. Traveling through Italy and France, Camenzind is increasingly disillusioned by the suffering he discovers around him; after failed romances and a tragic friendship, his idealism fades into crushing hopelessness. He finds peace again only when he cares for Boppi, an invalid who renews Camenzind's love for humanity and inspires him once again to find joy in the smallest details of every life.
10

Gertrude
With Gertrude, Herman Hesse continues his lifelong exploration of the irreconcilable elements of human existence. In this fictional memoir, the renowned composer Kuhn recounts his tangled relationships with two artists--his friend Heinrich Muoth, a brooding, self-destructive opera singer, and the gentle, self-assured Gertrude Imthor. Kuhn is drawn to Gertrude upon their first meeting, but Gertrude falls in love with Heinrich, to whom she is introduced when Kuhn auditions them for the leads in his new opera. Hopelessly ill-matched, Gertrude and Heinrich have a disastrous marriage that leaves them both ruined. Yet this tragic affair also becomes the inspiration for Kuhn's opera, the most important success of his artistic life.