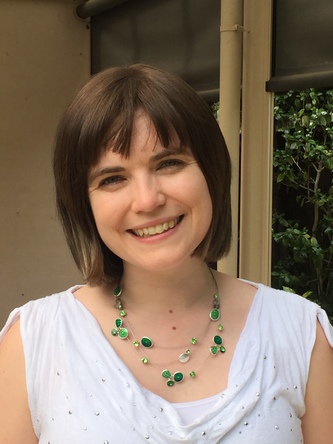 Melanie Cellier grew up on a staple diet of books, books and more books. And although she got older, she never stopped loving children’s and young adult novels.  She always wanted to write one herself, but it took three careers and three different continents before she actually managed it.

She now feels incredibly fortunate to spend her time writing from her home in Adelaide, Australia where she keeps an eye out for koalas in her backyard. Her staple diet hasn’t changed much, although she’s added choc mint Rooibos tea and Chicken Crimpies to the list.

She writes young adult fantasy including her Spoken Mage series, and her Four Kingdoms and Beyond the Four Kingdoms series which are made up of linked stand-alone stories that retell classic fairy tales.

Voice of Power (The Spoken Mage, #1)
In Elena's world words have power over life and death--but none more so than hers.

As the daughter of shopkeepers, Elena has always known that the mysteries of reading and writing were closed to her. Only the mageborn can risk harnessing the power unleashed from putting pen to paper. Until Elena discovers an impossible new ability and joins the elite ranks of the mages.

But with the kingdom at war, the authorities can't agree if Elena is an asset, or a threat they need to eliminate. Thrust into the unknown world of the Royal Academy without friends or experience, Elena will need all of her wits, strength, and new power to carve a place for herself.

Except as the attacks become more personal, wits and strength won't be enough. Elena will have to turn to new friends and an enigmatic prince to unlock the mysterious potential of her words and survive her first year as a trainee mage.

Voice of Power
Voice of Command
And coming in 2019:
Voice of Dominion
Voice of Life
02

A Dance of Silver and Shadow: A Retelling of the Twelve Dancing Princesses (Beyond the Four Kingdoms, #1)
When Princess Liliana and her twin sister set sail for new lands, Lily hopes to find adventure and romance. But the people of Marin live under the shadow of a curse—one powerful enough to destroy entire kingdoms. To protect them all, Lily and eleven other princesses are forced to participate in a mysterious and secret tournament.

Lily spends her nights competing in a magical underground realm and her days unraveling the dangers of this new court. Although she needs the help of the Marinese prince, Lily knows she can't let herself grow too close to him. There's no time for romance when the duchy is about to fall to the encroaching darkness and the winner of the tournament faces a terrible fate.

But Lily and her twin have a secret advantage. And Lily grows increasingly determined to use their magical bond to defeat the tournament, save the princesses, and free Marin. Except she might have to sacrifice true love to do it.

In this reimagining of the classic fairy tale, The Twelve Dancing Princesses, there's a lot more at stake than worn out dancing slippers.
03

Voice of Command (The Spoken Mage, #2)
Elena has found the power in her voice--now she must decide how to use it.

Finally accepted as a mage, Elena struggles with her commonborn roots. And when disaster strikes the kingdom, she can't shrug off the death toll as the mageborn have always done. Yet the limitations of her spoken magic hold her back--both in saving lives among the people and in competitions in the Academy's arena.

In desperation she turns to an unlikely source of assistance--Prince Lucas. But just as she begins to master her powers, she finds herself the pawn of stronger forces.

With everything she's struggled for almost within her grasp, she must decide what--and who--is worth sacrificing to come into her full power and take her place among the mages.

If you enjoy strong heroines, fantasy worlds, adventure, intrigue, and romance, then try the Spoken Mage series now, starting with Voice of Power.

Voice of Power
Voice of Command
And coming in 2019:
Voice of Dominion
Voice of Life
04

A Tale of Beauty and Beast: A Retelling of Beauty and the Beast (Beyond the Four Kingdoms, #2)
Princess Sophia has helped her twin sister Lily save the duchy of Marin. But now Sophie faces an even greater threat when she sets out to free the cursed kingdom of Palinar from its beastly prince. Alone, and with danger on every side, Sophie must navigate a magical castle and its even more mysterious master to discover the secret to breaking the curse.

Except the more time she spends with Prince Dominic, the more she starts to question who exactly she's supposed to be saving. With time running out for the trapped inhabitants, and the reappearance of an old enemy, Sophie may have to choose between saving the kingdom and following her heart.
05

Elena may be the only Spoken Mage in history, but she struggles with limitations. Unable to stockpile written workings as her mageborn year mates do, she runs the constant risk of burning out. But when the Armed Forces draw the third years to the front lines of their war, Elena's strength and flexibility may be necessary to keep them all alive.

As Elena wrestles with how much she will sacrifice for the war, Lucas must decide how much he's willing to sacrifice for her. Faced with a greater threat than even they realize, Elena and Lucas must work together and either fight or be consumed by their enemies.

In her fourth year, Elena should be focused on final exams and graduation. Instead, her future, and the future of those she loves, depends on her ability to stop a decades-long war. Join Elena and Lucas for their final year at the Academy.

If you enjoy strong heroines, fantasy worlds, adventure, intrigue, and romance, then try the Spoken Mage series now, starting with Voice of Power.

The Princess Companion: A Retelling of The Princess and the Pea (The Four Kingdoms, #1)
One dark and stormy night, lost and alone, Alyssa finds herself knocking on the door of a castle.

After a lifetime spent in the deep forest, Alyssa has no idea what to expect on the other side.

What she finds is two unruly young princesses and one very handsome prince. When Alyssa accepts the job of Princess Companion she knows her life will change. What she doesn’t know is that the royal family is about to be swept up in unexpected danger and intrigue and that she just might be the only thing standing between her kingdom and destruction.

This retelling of the classic fairy tale, The Princess and the Pea, reimagines the risks and rewards that come when one royal family goes searching for a true princess.

Danger and romance await a woodcutter’s daughter in a royal palace.
08

The Princess Search: A Retelling of The Ugly Duckling (The Four Kingdoms, #5)
An outcast.
A prince.
And a deadly rebellion...

After a lifetime of rejection, seamstress Evie can't trust Frederic, the crown prince of Lanover—not his words of friendship or the way the warmth in his eyes seems to ask for even more. But when they end up on a tour of his kingdom—one filled with increasing danger—Evie's mistrust might doom them all.

In this spin on the classic fairy tale, an ugly duckling must discover her true worth in order to save her kingdom and maybe even find true love.
09

A Crown of Snow and Ice: A Retelling of The Snow Queen (Beyond the Four Kingdoms, #3)
An unexpected gift from her godmother will give Celine enough fire to take on an entire kingdom of snow and ice. But first she needs to melt one frozen prince.

Rumors have long swirled about the strange kingdom of Eldon. The only thing more frozen than its mountains are the inhabitants themselves. But Princess Celine has never backed away from a challenge, so she eagerly accepts an invitation to visit.

Yet the situation in Eldon is even worse than Celine feared. And if the kingdom is to have any hope of freedom or a future, she’s going to have to call on new skills and new allies—including the crown prince, Oliver. But against an enemy stronger and colder than ice, all her fire may not be enough.

In this reimagining of the classic fairy tale, The Snow Queen, one princess is ready to burn down everything in her path to save those she loves and their kingdom with them.

If you enjoy clean romance, adventure and intrigue, then try the books in the Beyond the Four Kingdoms series now! These interconnected fairy tale retellings each feature a different princess who has to fight for her happily ever after.

Beyond the Four Kingdoms reading order:

A Dream of Ebony and White: A Retelling of Snow White (Beyond the Four Kingdoms, #4)
Snow has always lived under the shadow of her cruel stepmother, with only her beloved father and her childhood friend--the huntsman, Alexander--to make life bearable. When her father dies, she should be crowned queen, but instead she finds herself fleeing for her life. With no allies, no skills, and no food, her future could be over before it has truly begun.

But there's more at stake than just one life. If Snow can't claim her throne, her kingdom faces destruction. Snow has to make a choice: focus on her own salvation or put everything on the line--even those she loves the most. And if she's going to succeed, Snow must fight the hardest battle of all, against her own doubt and weakness, and gain new skills and strength she never imagined possessing.

Alexander is ready to help her. But if she lets him, the consequences might be more than she can bear--because her heart is in as much jeopardy as the kingdom.

In this reimagining of the classic fairy tale, Snow must find her inner strength in time to fight for her throne before it's too late.

If you enjoy clean romance, adventure and intrigue, then try the books in the Beyond the Four Kingdoms series now! These interconnected fairy tale retellings each feature a different princess who has to fight for her happily ever after.