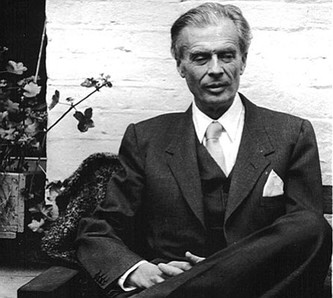 Aldous Leonard Huxley was an English writer and one of the most prominent members of the famous Huxley family. He spent the latter part of his life in the United States, living in Los Angeles from 1937 until his death in 1963. Best known for his novels and wide-ranging output of essays, he also published short stories, poetry, travel writing, and film stories and scripts. Through his novels and essays Huxley functioned as an examiner and sometimes critic of social mores, norms and ideals. Huxley was a humanist but was also interested towards the end of his life in spiritual subjects such as parapsychology and philosophical mysticism. By the end of his life, Huxley was widely acknowledged as one of the pre-eminent intellectuals of his time.

Brave New World
Brave New World is a dystopian novel by English author Aldous Huxley, written in 1931 and published in 1932. Largely set in a futuristic World State, inhabited by genetically modified citizens and an intelligence-based social hierarchy, the novel anticipates huge scientific advancements in reproductive technology, sleep-learning, psychological manipulation and classical conditioning that are combined to make a dystopian society which is challenged by only a single individual: the story's protagonist.
02

Brave New World / Brave New World Revisited
The astonishing novel Brave New World, originally published in 1932, presents Aldous Huxley's vision of the future--of a world utterly transformed. Through the most efficient scientific and psychological engineering, people are genetically designed to be passive and therefore consistently useful to the ruling class. This powerful work of speculative fiction sheds a blazing critical light on the present and is considered to be Aldous Huxley's most enduring masterpiece.

The non-fiction work Brave New World Revisited, published in 1958, is a fascinating work in which Huxley uses his tremendous knowledge of human relations to compare the modern-day world with his prophetic fantasy envisioned in Brave New World, including the threats to humanity, such as over-population, propaganda, and chemical persuasion.
03

The Doors of Perception & Heaven and Hell
As only he can, Aldous Huxley explores the mind's remote frontiers and the unmapped areas of human consciousness. These two astounding essays are among the most profound studies of the effects of mind-expanding drugs written in this century. Contains the complete texts of The Doors of Perception and Heaven and Hell , both of which became essential for the counterculture during the 1960s and influenced a generation's perception of life.
04

Island
In Island, his last novel, Huxley transports us to a Pacific island where, for 120 years, an ideal society has flourished. Inevitably, this island of bliss attracts the envy and enmity of the surrounding world. A conspiracy is underway to take over Pala, and events begin to move when an agent of the conspirators, a newspaperman named Faranby, is shipwrecked there. What Faranby doesn't expect is how his time with the people of Pala will revolutionize all his values and—to his amazement—give him hope.
05

Point Counter Point
Aldous Huxley's lifelong concern with the dichotomy between passion and reason finds its fullest expression both thematically and formally in his masterpiece Point Counter Point. By presenting a vision of life in which diverse aspects of experience are observed simultaneously, Huxley characterizes the symptoms of "the disease of the modern man" in the manner of a composer--themes and characters are repeated, altered slightly, and played off one another in a tone that is at once critical and sympathetic.

First published in 1928, Huxley's satiric view of intellectual life in the '20s is populated with characters based on such celebrities as D.H. Lawrence, Katherine Mansfield, Nancy Cunard, and John Middleton Murry, as well as Huxley himself.
07

The Doors of Perception
The Doors of Perception is a philosophical essay, released as a book, by Aldous Huxley. First published in 1954, it details his experiences when taking mescaline. The book takes the form of Huxley's recollection of a mescaline trip that took place over the course of an afternoon in May 1953. The book takes its title from a phrase in William Blake's 1793 poem 'The Marriage of Heaven and Hell'. Huxley recalls the insights he experienced, which range from the "purely aesthetic" to "sacramental vision". He also incorporates later reflections on the experience and its meaning for art and religion.
08

Crome Yellow
On vacation from school, Denis goes to stay at Crome, an English country house inhabited by several of Huxley's most outlandish characters--from Mr. Barbecue-Smith, who writes 1,500 publishable words an hour by "getting in touch" with his "subconscious," to Henry Wimbush, who is obsessed with writing the definitive "History of Crome." Denis's stay proves to be a disaster amid his weak attempts to attract the girl of his dreams and the ridicule he endures regarding his plan to write a novel about love and art. Lambasting the post-Victorian standards of morality, Crome Yellow is a witty masterpiece that, in F. Scott Fitzgerald's words, "is too ironic to be called satire and too scornful to be called irony."
09

Ape and Essence
In February 2108, the New Zealand Rediscovery Expedition reaches California at last. It is over a century since the world was devastated by nuclear war, but the blight of radioactivity and disease still gnaws away at the survivors. The expedition expects to find physical destruction but they are quite unprepared for the moral degradation they meet. Ape and Essence is Huxley's vision of the ruin of humanity, told with all his knowledge and imaginative genius.
10

The Perennial Philosophy
The Perennial Philosophy is defined by its author as "The metaphysic that recognizes a divine Reality substantial to the world of things and lives and minds." With great wit and stunning intellect, Aldous Huxley examines the spiritual beliefs of various religious traditions and explains them in terms that are personally meaningful.

An inspired gathering of religious writings that reveals the "divine reality" common to all faiths, collected by Aldous Huxley

"The Perennial Philosophy," Aldous Huxley writes, "may be found among the traditional lore of peoples in every region of the world, and in its fully developed forms it has a place in every one of the higher religions."

With great wit and stunning intellect—drawing on a diverse array of faiths, including Zen Buddhism, Hinduism, Taoism, Christian mysticism, and Islam—Huxley examines the spiritual beliefs of various religious traditions and explains how they are united by a common human yearning to experience the divine. The Perennial Philosophy includes selections from Meister Eckhart, Rumi, and Lao Tzu, as well as the Bhagavad Gita, Tibetan Book of the Dead, Diamond Sutra, and Upanishads, among many others.