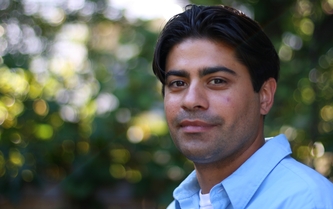 Urban Waite is the author of The Terror of Living, named one of Esquire's Ten Best Books of the year. His latest book is The Carrion Birds, an Indie Next Pick and the recipient of starred reviews from Publishers Weekly and Booklist. His short fiction has appeared in the Best of the West anthology, the Southern Review, and other journals. He has degrees from the University of Washington, Western Washington University, and Emerson College. He lives in Seattle with his wife.

The Terror of Living
Phil Hunt is deep in trouble. For twenty years he's lived in Washington State, raising horses with his wife on his small farm and trying to stay clear of the law. But when a less-than-legal side job goes horribly wrong, Hunt is suddenly on the run from two men: Drake, the deputy sheriff who intends to incarcerate him, and Grady, the vicious hitman with a knife fetish who means to carve him limb from limb.

An explosive chase ensues, and Hunt is forced to use all his willpower and toughness to rescue his quiet life and save his skin. Headlong and gorgeously written, with memorable characters and a vividly powerful sense of place, The Terror of Living marks the arrival of a new master of narrative suspense.
02

Sometimes the Wolf
Set in the Pacific Northwest, a spellbinding story of family, violence, and unintended consequences that showcases the searing prose, soulful characters, and vivid sense of place of an acclaimed writer in the tradition of Cormac McCarthy, Dennis Lehane, and Elmore Leonard

Sheriff Patrick Drake tried to lead an upstanding life and maintain some financial stability until his wife passed away. He did okay for a while, singlehandedly raising his family in a small mountain town. Then he was hit with money troubles, fell in with some unsavory men, and ended up convicted of one of the biggest crimes in local history.

Twelve years later Patrick is on parole under the watchful eye of his son Bobby, who just happens to be a deputy sheriff in his father’s old department. Bobby hasn’t had it easy, either. He’s carried the weight of his father’s guilt, forsaking his own dreams, and put off the knowledge that his own marriage could be stronger and more hopeful. Yet no matter how much distance he’s tried to put between himself, his father, his grandfather, and the past, small town minds can have very long memories.

Trouble isn’t done with the Drakes—and a terrifying threat boils up from Patrick’s old life. And this time, no one will be spared . . .
03

The Carrion Birds
Set in a small town in the Southwest, a soulful work of literary noir rife with violence, vengeance, and contrition from a fresh voice in fiction-the author of the highly acclaimed The Terror of Living

Life hasn't worked out the way Ray Lamar planned. A widower and father who has made some tragic mistakes, he's got one good thing going for him: he's calm, cool, and efficient under pressure, usually with a gun in his hand. A useful skill to have when you're paid to hurt people who stand in your boss's way.

But Ray isn't sure he wants to be that man anymore. He wants to go home to Coronado, New Mexico, to see the twelve-year-old son he hopes will recognize him. He wants to make a new life far from the violence of the last ten years. One last job will take him there. All he has to do is steal a rival's stash. Simple, easy, clean.

Ray knows there's no such thing as easy, and sure enough, the first day ends in a catastrophic mess. Now, the runners who have always moved quietly through this idyllic desert town on the Mexican border want answers. And revenge. Short on time, with no one to trust but himself, Ray must come up with a clever plan or Coronado's newly appointed lady sheriff will have a vicious bloodbath on her hands.

Relentlessly paced and beautifully orchestrated, with refreshingly real, vulnerable, and very human characters and a vivid sense of place, The Carrion Birds is an unsettling and indelible work of literary noir in the tradition of Cormac McCarthy, Elmore Leonard, and Dennis Lehane.
04

Hope County, Montana. Land of the free and the brave, but also home to a fanatical doomsday cult known as The Church of Eden’s Gate that has slowly been infiltrating the residents’ daily lives in the past years.

Mary May Fairgrave, a local barkeep, has lost almost everything to the Church: her parents died in suspicious conditions and her brother, entranced by the cult leader’s charismatic words, has vanished. When the authorities refuse to investigate further, she decides to take matters in to her own hands.

Local hunter William Boyd was saved by Eden’s Gate years ago, during the darkest moments of his life. When his duties lead him to cross paths with Mary May, the daughter of one of his old friends, he soon discovers that what is happening in the county is far from what he believed.

Within this peaceful valley rife with duplicity and suspicions, nothing is as it seems. It will not be who strikes first, but who strikes last that will decide the fate of every soul within the small town of Fall’s end.
05

Dead If I Don't
Life hasn't worked out the way Ray had planned it would. 10 years ago he had a wife, a job, a child. Now he has nothing. And nothing to lose. And so he is back in his hometown of Coronado for one last job. One small job and that will be the end. But in the past 10 years the rules have changed. And this one last job soon turns into a nightmare he cannot escape.
06

Don't Look Away
"I heard about Eddie on the news. Of course they didn’t say his name or list anything more than what happened. There was a police raid on a farm outside Seattle: about ten dogs were seized and a man had been arrested."

Novelette, originally published in Hayden’s Ferry Review and The Best of the West Anthology.
07

Los Desaparecidos
"It was snowing again in Santiago. On the news the boats were out in Valparaíso Bay, the divers in the water. I sat on the couch watching the flakes fall into the Pacific. The gunwales all but covered, and the simple blue of the boat turning white. And when I close my eyes the television disappears and I see bodies falling from airplanes, helicopters circling in the night. The snow taps gently against my window. It has been thirty years, and now they wanted to rush."

First published in The Southern Review.
10