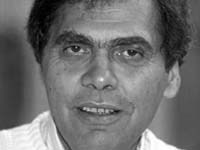 Neil Postman, an important American educator, media theorist and cultural critic was probably best known for his popular 1985 book, Amusing Ourselves to Death. For more than four decades he was associated with New York University, where he created and led the Media Ecology program.

He is the author of more than thirty significant books on education, media criticism, and cultural change including Teaching as a Subversive Activity, The Disappearance of Childhood, Technopoly, and Building a Bridge to the Eighteenth Century.

Amusing Ourselves to Death (1985), a historical narrative which warns of a decline in the ability of our mass communications media to share serious ideas. Since television images replace the written word, Postman argues that television confounds serious issues by demeaning and undermining political discourse and by turning real, complex issues into superficial images, less about ideas and thoughts and more about entertainment. He also argues that television is not an effective way of providing education, as it provides only top-down information transfer, rather than the interaction that he believes is necessary to maximize learning. He refers to the relationship between information and human response as the Information-action ratio.

Neil Postman is the author of books: Amusing Ourselves to Death: Public Discourse in the Age of Show Business, Technopoly: The Surrender of Culture to Technology, The End of Education: Redefining the Value of School, The Disappearance of Childhood, Teaching as a Subversive Activity, Building a Bridge to the 18th Century: How the Past Can Improve Our Future, How to Watch TV News, Conscientious Objections: Stirring Up Trouble About Language, Technology and Education, Teaching As A Conserving Activity, Crazy Talk, Stupid Talk

Amusing Ourselves to Death: Public Discourse in the Age of Show Business
Television has conditioned us to tolerate visually entertaining material measured out in spoonfuls of time, to the detriment of rational public discourse and reasoned public affairs. In this eloquent, persuasive book, Neil Postman alerts us to the real and present dangers of this state of affairs, and offers compelling suggestions as to how to withstand the media onslaught. Before we hand over politics, education, religion, and journalism to the show business demands of the television age, we must recognize the ways in which the media shape our lives and the ways we can, in turn, shape them to serve out highest goals.
02

Technopoly: The Surrender of Culture to Technology
In this witty, often terrifying work of cultural criticism, the author of Amusing Ourselves to Death chronicles our transformation into a Technopoly: a society that no longer merely uses technology as a support system but instead is shaped by it--with radical consequences for the meanings of politics, art, education, intelligence, and truth.
03

The End of Education: Redefining the Value of School
Postman suggests that the current crisis in our educational system derives from its failure to supply students with a translucent, unifying "narrative" like those that inspired earlier generations. Instead, today's schools promote the false "gods" of economic utility, consumerism, or ethnic separatism and resentment. What alternative strategies can we use to instill our children with a sense of global citizenship, healthy intellectual skepticism, respect of America's traditions, and appreciation of its diversity? In answering this question, The End of Education restores meaning and common sense to the arena in which they are most urgently needed.

The Disappearance of Childhood
From the vogue for nubile models to the explosion in the juvenile crime rate, this modern classic of social history and media traces the precipitous decline of childhood in America today ˆ’and the corresponding threat to the notion of adulthood.

Deftly marshaling a vast array of historical and demographic research, Neil Postman, author of Technopoly, suggests that childhood is a relatively recent invention, which came into being as the new medium of print imposed divisions between children and adults. But now these divisions are eroding under the barrage of television, which turns the adult secrets of sex and violence into popular entertainment and pitches both news and advertising at the intellectual level of ten-year-olds.
05

Teaching as a Subversive Activity
A no-holds-barred assault on outdated teaching methods--with dramatic & practical proposals on how education can be made relevant to today's world.
Introduction
Crap detecting
The medium is the message, of course
The inquiry method
Pursuing relevance
What's worth knowing?
Meaning making
Languaging
New teachers
City schools
New languages: the media-
Two alternatives
So what do you do now?
Strategies for survival
06

Postman shows us how to reclaim that balance between mind and machine in a dazzling celebration of the accomplishments of the Enlightenment-from Jefferson's representative democracy to Locke's deductive reasoning to Rousseau's demand that the care and edification of children be considered an investment in our collective future. Here, too, is the bold assertion that Truth is invulnerable to fashion or the passing of time. Provocative and brilliantly argued, Building a Bridge to the 18th Century illuminates a navigable path through the Information Age-a byway whose signposts, it turns out, were there all along.
07

How to Watch TV News
An important guide to understanding what you're getting--and not getting--from TV news. Postman and Powers warn that anyone who relies exclusively on TV for a knowledge of the world is making a serious mistake and suggest ways to intelligently evaluate TV news shows.
08

Conscientious Objections: Stirring Up Trouble About Language, Technology and Education
In a series of feisty and ultimately hopeful essays, one of America's sharpest social critics casts a shrewd eye over contemporary culture to reveal the worst -- and the best -- of our habits of discourse, tendencies in education, and obsessions with technological novelty. Readers will find themselves rethinking many of their bedrock assumptions: Should education transmit culture or defend us against it? Is technological innovation progress or a peculiarly American addiction? When everyone watches the same television programs -- and television producers don't discriminate between the audiences for Sesame Street and Dynasty -- is childhood anything more than a sentimental concept? Writing in the traditions of Orwell and H.L. Mencken, Neil Postman sends shock waves of wit and critical intelligence through the cultural wasteland.
09

Teaching As A Conserving Activity
10