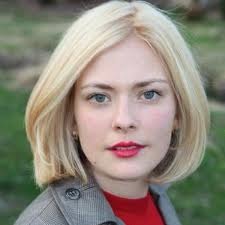 Susannah Cahalan is the New York Times bestselling author of "Brain on Fire: My Month of Madness," a memoir about her struggle with a rare autoimmune disease of the brain. She writes for the New York Post. Her work has also been featured in the New York Times, Scientific American Magazine, Glamour, Psychology Today, and others.

Susannah Cahalan is the author of books: Brain on Fire: My Month of Madness, The Great Pretender: The Undercover Mission That Changed Our Understanding of Madness

Brain on Fire: My Month of Madness
An award-winning memoir and instant New York Times bestseller that goes far beyond its riveting medical mystery, Brain on Fire is the powerful account of one woman’s struggle to recapture her identity.

When twenty-four-year-old Susannah Cahalan woke up alone in a hospital room, strapped to her bed and unable to move or speak, she had no memory of how she’d gotten there. Days earlier, she had been on the threshold of a new, adult life: at the beginning of her first serious relationship and a promising career at a major New York newspaper. Now she was labeled violent, psychotic, a flight risk. What happened?

In a swift and breathtaking narrative, Cahalan tells the astonishing true story of her descent into madness, her family’s inspiring faith in her, and the lifesaving diagnosis that nearly didn’t happen.
02

The Great Pretender: The Undercover Mission That Changed Our Understanding of Madness
From "one of America's most courageous young journalists" (NPR) comes a propulsive narrative history investigating the 50-year-old mystery behind a dramatic experiment that changed the course of modern medicine.

For centuries, doctors have struggled to define mental illness-how do you diagnose it, how do you treat it, how do you even know what it is? In search of an answer, in the 1970s a Stanford psychologist named David Rosenhan and seven other people -- sane, normal, well-adjusted members of society -- went undercover into asylums around America to test the legitimacy of psychiatry's labels. Forced to remain inside until they'd "proven" themselves sane, all eight emerged with alarming diagnoses and even more troubling stories of their treatment. Rosenhan's watershed study broke open the field of psychiatry, closing down institutions and changing mental health diagnosis forever.

But, as Cahalan's explosive new research shows, very little in this saga is exactly as it seems. What really happened behind those closed asylum doors, and what does it mean for our understanding of mental illness today?