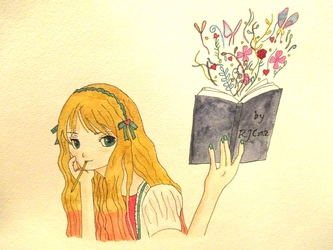 RJ Conte has kissed only one boy in her entire life - and she married him - inspiring her to write about sweet or powerful love stories ever since. She writes issue-driven fiction that explores human nature and the depths of the soul while pointing readers to their Creator.

She writes a blog on parenting, publishing, painting, and perorating at http://blonderj.wordpress.com/

R.J. Conte is the author of books: Lucent Sylph, My Fault, Heartsick, Artificial Love, The End of the Dream, Gem, The Hotline Girl, Angel-Lover, The 12th Girl in Heaven, A Bottle of Glass Hearts: A Short Story Collection

My Fault
"I realized his eyes had lost that wary look. They were the bluest blue. Bluer than my favorite coffee mug. Bluer than the Solonaise County Public Pool when it’s actually been cleaned at the beginning of the summer before all those little kids in their floaties come and pee in it."

Quirky Cleo Stanton has a problem: she's falling for the guy she ran over with her car when she should not have been driving.

The devout Christian and quietly mysterious, Grayson Fox is as cute as he is kind, begrudgingly putting up with Cleo and her motor mouth. But will he ever forgive her for crushing his leg? Can she break him out of his shell? And what hilarity will ensue when the flamboyant Cleo tries to draw him out?
03

Artificial Love
Deep in the heart of the wild west, rebel marauders are drawing out a bloody civil war that no side can win. Many ranchers, including Lisbeth's father die trying to save their farms, leaving their women to fight to keep their land and stay alive.

When Lisbeth and her mousy younger sister Ruth come face to face with the uncouth land pirates who seize their farm as a scouting base, they only have one plan to protect their virtue: pretend to be commonplace, advanced domestic robots. Suppressing their fears, enslaved to the ruffians, the two young women are determined to convince the men they're not human.

Their plan hits a snag when they meet Dane: a gorgeous prisoner-of-war who has a secret belief that robots can become sentient and develop emotions on their own... and he's determined to use Lisbeth as proof.

Can the sisters keep up their ruse and survive?

The End of the Dream
Ash, the mysterious new guy in town, is everything Vivien is not: friendly, cheerful, and carefree, with a deep Christian faith.

Vivien doesn't understand why Ash would choose her as a friend, but as a shy, reclusive teen with an absent father and airhead stepmom, she is drawn to him. She even gets to join him in fulfilling his special "Summer Can't Suck" activities list.

But when she finds herself falling for him, Ash begins to reveal suspicious gaps in his memory. Things are not adding up...
06

A Bottle of Glass Hearts: A Short Story Collection
From RJ Conte, weaver of deep, emotional fiction, comes a touching collection of short stories about love and unique relationships - including the bestselling Lucent Sylph!

GEM:
When Soleil is hired as caretaker to a young boy born with superhuman powers, it's up to her hope and optimism to help him survive his dangerous destiny - stopping the core earthquake that will destroy the world.

HIS BOTTLES OF TEARS
Her daughter has left the faith, and her heart is dashed in pieces. Then Jesus shows her a room full of bottles in a dream - vessels filled with tears, carrying stories she will never forget.

And one of them is her own.

CURLS FOR RAE
Rae has the most beautiful hair in the world… and the saddest eyes. Every week she returns to Blaine’s hairdressing shop, saying hardly a word. As he transforms her into the beauty of his dreams, she cries in silence. His heart breaks for her secret sorrow, and he longs to discover the mystery behind her tears.

AINE, STARWARRIOR
For centuries, Aine and her magnificent kindred have protected the skies from vast, galaxy-sized threats. But her fiercest battle yet will determine the fate of thousands on the unsuspecting planets below. Will she have the creativity and fortitude to defeat this newest enemy?

LUCENT SYLPH
Lucas Thissel has something he fears: an alien species of palm-sized glass fairies called Lucent Sylphs. They came through a portal from a metaphysical dimension, and they indenture themselves as slaves to human beings. Too much neglect or unkindness, and they will cloud over and disintegrate. Too much love and their hearts are overcome and burst.

And one has attached herself to him.